David Wong, the Chairman of ASOCIO (Asian-Oceania Computing Industry Organisation), talks about the importance of the association and why PIKOM is highly regarded in the region. 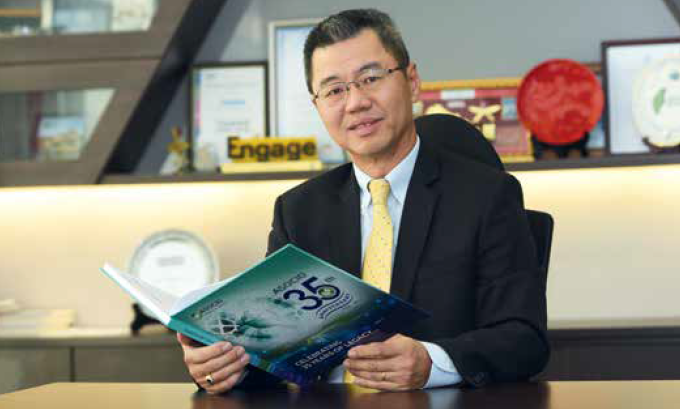 David Wong, the past chairman of PIKOM, has been the chairman of Asian-Oceania Computing Industry Organization (ASOCIO) since 2017. Each chairman serves for two years. David has been elected chairman twice, which makes him at present the longest serving chairman of ASOCIO.

ASOCIO is a grouping of IT industry associations representing economies in the Asia and Oceania region. It was established in 1984 with the objective to promote, encourage and foster relationships and trade between its members, and to develop the computing industry in the region. ASOCIO comprises 24members. Its mission is to be globally recognised as the champion for Asia Oceania in the promotion and facilitation of ICT trade and development for its members. Today, ASOCIO’s members account for more than 10,000 ICT companies and represents about US$350 billion of ICT revenue in the region. The member countries of ASOCIO are Australia, Bangladesh, Bhutan, Brunei, Cambodia, Chinese Taipei, Hong Kong, India, Indonesia, Japan, Laos, Macao, Malaysia, Mongolia, Myanmar, Nepal, New Zealand, Pakistan, Philippines, Singapore, Korea, Sri Lanka, Thailand and Vietnam.

Besides his role in ASOCIO, David is a well-known figure in the IT industry as he has more than 35 years of track record and experience in the ICT, logistic, e-Commerce and retail services.

In 2000, he founded and embarked on his new startup, SnT Global Sdn Bhd, of which he is the executive chairman.

ASOCIO celebrated its 35th anniversary with a grand dinner during the ASOCIO ICT Awards and Gala Dinner 2019 on 12th November 2019. The dinner closed the very successful ASOCIO-PIKOM Digital Summit 2019.

On Dec 17, 2019 , ASOCIO was awarded the Brandlaureate award. ASOCIO also signed an MOU with Brandlaureate to collaborate on cross border branding, talent and certification program. He also received the Business ICON award of the Decade.

In this modern age a country has to look beyond its domestic market to the international market for its economy to thrive. This is where ASOCIO plays its part in this digital economy, explains David. “The Asia Pacific rim is one of the fastest growing areas in the world for many things, including cross border trade, smart cities, Internet and mobile penetration to name a few. ASOCIO is a powerful platform to bring national ICT organisations of 24 countries to share, communicate and collaborate the vision relating to the experience of digital transformation in the respective countries.”

He outlines the three important areas where being part of ASOCIO helps member countries. They are:

ASOCIO gives member countries many opportunities to have collaboration between government to government, government to industry and industry to industry. All these efforts go a long way in furthering cross border trade, says David. “More importantly, it will help achieve some of the digital visions and objectives of these countries faster than if they had to do it by themselves.”

ASOCIO organises activities and programmes for countries to participate so that they can meet counterparts from other countries. “This gives a great opportunity for countries to network and expand their business by finding regional partners,” he explains.

ASOCIO represents powerful ICT voices from different countries. Malaysia is represented by PIKOM and it holds an influential position in the organisation. David is the third Malaysian to be the chairman of ASOCIO, the most by any countries. Other countries look to Malaysia and PIKOM in admiration says David. “PIKOM has been very successful as the voice of the tech industry in Malaysia. Other countries recognise us a model to look up to. PIKOM has also organised events that are very well received. The leadership that we have provided ASOCIO has been appreciated and created a lot of impact.”

He continues: “We have a strong continuity of leadership in PIKOM where the past chairman works with the present chairman. And PIKOM has created a strong bond between the old generation and the new generation coming in. I have often heard from other associations how amazed they are that PIKOM has created this intergenerational bond among its own members.

“PIKOM is also admired because we organise many events that are successful and revenue generating and we have pioneered some events that have gone on to be adapted by others. For example, the multi-bilateral trade visits (MTV) was initiated by PIKOM where members visit one host country to learn more about how the industry works there and to network to meet new partners. MTV is now one of the important activities at ASOCIO.”

As chairman, David has brought substantial changes to ASOCIO. One of the first things he did was to bring together members to change its vision and mission of the organisation. Together with his committee, he also came up with a three-year plan to drive the membership in the organisation, generate new revenue growth and to increase the awareness and branding of ASOCIO.

He also got ASOCIO to focus on three areas to develop. These are e-Commerce, smart city and on policy. “We created a task force to look into these three areas that the organisation did not focus before,” explains David. “We also introduced the ASOCIO Awards because we felt that it was important to give recognition to those companies that have done well. There are four categories: the government/agencies, the user, the ICT providers and the education/organisation.”

David is pleased that most of the objectives under the three-year plan are on track. He is especially happy that the ASOCIO-PIKOM Digital Summit 2019 held in Kuala Lumpur was a great success. “The Summit was very successful and one of the things to be very proud of is that we launched our policy paper on data privacy called ASOCIO’s Policy Guidance on Data Privacy. ASOCIO wants to be the advocate of policies that will impact the digital transformation. This will be the first of the many policy papers that we will release,” he says. (For more on this see ASOCIO-PIKOM Digital Summit).

ASOCIO is truly living up to its vision of being a “catalyst of Asia Pacific digital transformation and enablement”.